Last week we mentioned the Mizrahi.  Then over the weekend I came upon a copy of a Young People’s Zionist League newsletter from 1919 which carried a story about the Mizrachi Organization.  I took it as a sign. Mizrahi Jews (מִזְרָחִים) (coined in the 1950s, from the term Edot Hammizrah, Communities of the East) derive […]

We are doing a lot of “hakafoting” recently, as I like to say!  Okay, I made up that verb by smashing the Hebrew into an English construct.  But it may yet catch on…. Hakafah (הקפה) (plural is הקפות) derives from the sense of “surrounding” or “encircling.”  In this case it means “to go around.”  (הקפה […]

Egalitarianism has become part of the core of the Conservative Movement, but where did it come from? This year, we will be exploring Jewish legal basis of egalitarianism through responsa literature and halakhic sources. March 17th is downtown at Metz Lewis Brodman Must O’Keefe LLC 535 Smithfield Street, Suite 800 This event is a BYOL, […]

March 10th is at Congregation Beth Shalom Egalitarianism has become part of the core of the Conservative Movement, but where did it come from? This year, we will be exploring Jewish legal basis of egalitarianism through responsa literature and halakhic sources. Please register at the link to order lunch! If you have any questions, please […]

As fasting is so recently on our minds, when we received this question our inquiring mind wanted to know. The word “fast” is interesting.  It can also mean moving quickly or even not moving at all (fixed in place)! Incidentally, when a word has two diametrically opposed meanings, the two word/meanings are called “auto-antonyms”  or […]

Why Do People Wear White on Yom Kippur? Originally Published on October 4-5, 2019.

The trend of wearing white on Yom Kippur, at least a bit of white, has been spreading in recent years.  Back in the days of the Temple, the High Priest dressed in white linen on Yom Kippur. In some congregations, a white kittel is worn by congregants.  Some say only married men should wear a […]

Scotch, Wine & More in the Sukkah

What Is the Yom Kippur Martyrology? Originally Published September 27-28, 2019

A “martyrology” is a listing and/or history of martyrs of a particular group.  Catholics have the Roman Martyrology, for instance, and local ones such as Martyrologium Hieronymianum.  On Yom Kippur we have Eleh Ezkereh, “These We Remember,” which is often referred to as the Yom Kippur Martyrology.  This is the passage we read on Yom […] 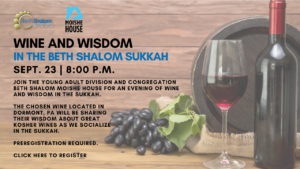