The Federation of Jewish Men’s Clubs (FJMC) created the Yellow Candle program in 1981.  The purpose is to keep alive the memory of the Six Million Jews who perished in the Holocaust.  (Your correspondent also remembers the additional six or seven million Romani, gays, Catholics, and other targets of prejudice who were slaughtered.)

Twenty-four-hour memorial candles are a long-standing Jewish tradition, and these particular candles are meant to be burned on Yom HaShoah, which this year is April 20-21, 2020.  (One lights the candle after sundown on April 20.)  Since there were so few survivors and no way to mark the dates of death, this is a sort of blanket yahrzeit observance.  The color yellow is meant to reflect the yellow stars which Jews were forced to wear.  (Romani wore black triangles.  Gays wore pink triangles, now reflected in the positive use of hot pink as part of the rainbow.)

The program serves as a way of teaching our young about the Holocaust, and about the prejudice which we are sad to say still so obviously exists.  In every generation there will be another…  and they seem to be coming ever more frequently.

Beth Shalom’s Men’s Club will be working with our youth to pack up the candles for mailing.   When you receive your candle in the mail, please remember to light it at the appropriate time and also please consider making a donation.  We Jews also have a long tradition of making donations to our institutions in memory of those whom we have lost.

Some say the yahrzeit candle (נר נשמה - ner neshamah, soul candle) tradition comes from Proverbs 20:27 “The soul of man is a candle of the Lord.”  In Yiddish it is called the yortsayt likht,  יאָרצײַט ליכט.  Likht is “light.”  Yor means “year” and tsayt means “time” both in Yiddish and in German (different spellings).  (The “z” in Yahrzeit is pronounced “ts” just as in “Alzheimer’s disease,” which is standard Germanic pronunciation of that letter, spelled with a tsadi in Yiddish.)

Some have found evidence of Jews lighting memorial candles 2,000 years ago, in the Mishaic period, as read into the statement (Talmud, Berakhot 51b and 53a) that one cannot use the “fire of the dead” for the havdalah blessing on Saturday night because it was lit not for the living but to honor the dead.  The meaning, combining the spiritual light with the physical, is said to have been to leave some light where a departed soul has left darkness.

On a Yahrzeit we light a candle, we say Kaddish with a minyan, and we give donations in memory of the departed.  And we remember to talk about those we have lost, to keep their memories alive, which is also why we name our children after the departed.  May their souls be bound up in the bonds of eternal life, which will be a future topic. 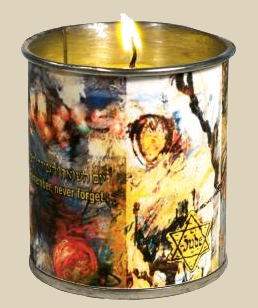