From 1937 to 1943, Elias Zaludkowski was Cantor of Congregation Beth Shalom.  (I hear some of you saying, “I knew that!”)  He and Rabbi Goodman Rose (who served this congregation from 1924 to 1950), the second Cantor and the second Rabbi to serve the congregation, put together a siddur, eponymously The Friday Evening Late Service.  Some of the music was composed by Cantor Zaludkowski.  At the right is a piece arranged by him, the first page of the book.  It was published in 1940.

The son of well-known Cantor of Kalisz Noah Zaludkowski, Elias (Eliyohu) was born in 1888 in Meytshet (Molchad), Slonim district, Belarus.  At age two, the family moved to Kalish, Poland, and from age nine he studied with Rabbi Shimshen Orenshteyn, in addition to attending public school.  He learned to play the violin at an early age.  In 1905 he studied in Milan, Italy, with voice Professor Augusto Broggi.  He also would study in Vienna, and at the Kaiser’s Music Academy in Berlin.  He graduated from the Stern Conservatory with a silver medal in 1909, and became the chief cantor of Sinai Synagogue in Warsaw.  He wrote about music in the Hebrew Hatsfira and in the Yiddish Unzer Lebn under the pen name “Even.”

Cantor Zaludkowski worked his way around Europe, serving as cantor in the Great Synagogue in Rostov-on-Don while teaching voice in the conservatory and singing tenor in the opera.  He worked in Vilna, while composing and wriyting about music, in Liverpool, where he wrote for Der Idisher Ekspress and published a book about music in the 19th century - a historical-biographical survey (1925).  In 1926 he came to the U.S., worked at shuls in New York, and served as cantor at Temple Shaarey Zedek from 1926-1932.

Then he flitted among other cities and landed here at Beth Shalom.  He published much music and also books, including a cantor’s prayer book, an autobiography, and a compilation he called Tefillat No’ah va-Avodat Eliyahu, comprising his and his father’s compositions.  He was the founder and president (1928-1932) of the Cantors’ Society of the Midwest.

He is buried at Beth Shalom Cemetery, in Section DD, beside his wife Mania.

The monument says “The perpetuation of the Torah in music was his life.”  His epitaph says

Roughly, “Beneath the shadow of the good Book, God sings in prayer with him.” 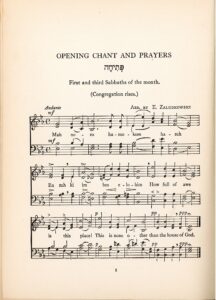