Home | What Are Those Thingy-Dos in that Abbreviation? Originally Published March 6-7, 2020.

What Are Those Thingy-Dos in that Abbreviation? Originally Published March 6-7, 2020.

If only “Thingy-Do” were a technical term!*  This doo-hickey comes with fingers wiggling in the air.  There are a few different items we find in Hebrew that are double strokes.  And as near as we can tell, they are all called gershayim.

In an abbreviation, as on the gravestone seen in the image, we use the straight gershayim, or sometimes only one geresh. 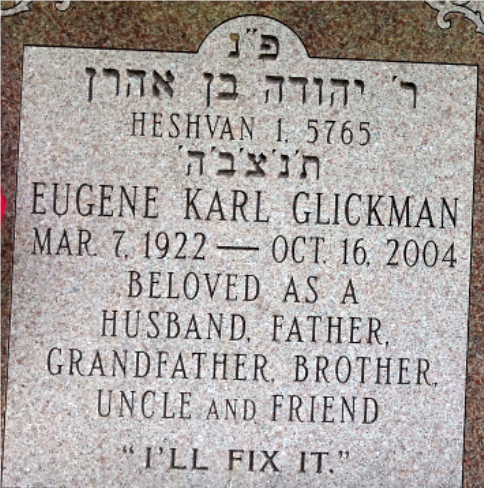 On gravestones one often sees פ״נ which stands for (essentially) “here lies.”  One also may see the abbreviation (with a series of single gereshim) for “may her/his soul be bound up in the bond of life”:  ת׳נ׳צ׳ב׳ה׳.  Sometimes a single geresh is used in פ׳נ, too.

Gershayim are also used for acronyms - as a way of letting one know that the “word” is an acronym.  The letters of “Tanakh” תנ״ך)) stand for the books comprising it - Torah,  Nevi’im (Prophets), Ketuvim (Writings).  Maimonides was known as Rambam (רמב״ם).

Gershayim may also indicate the name of a Hebrew letter, as in עַיִ״ן  as opposed to the word עַיִן (eye).  They also may indicate a numeral written with Hebrew letters:  14 is י״ד .  One may also see a single-digit numberal:  3 is ג״.

When writing a name in Hebrew which does not carry a letter with that sound - such as a “J” - one would write a geresh after the appropriate letter to show that sound:  Gene is ג׳ין.

Other such letter substitutions include ז׳  as in קוֹלַאז׳ (collage) and ו׳ (or sometimes וו but that does not have a geresh) for a “w.”  (There are more such combinations, for sounds in languages other than English.)

Full word transliterations may also be called out by gershayim:  Rashi refers to his home town Troyes as טרוי״ש.

Sometimes one will see in printed material apostrophes or quotation marks used instead of geresh or gershayim.  That is because many fonts do not support the marks.  One would use the “99” (”) marks rather than the “66” (“) (see the photo for an example of those, too!).  The computer code for gershayim is U+05F4, and for the singular geresh it is U+05F3.