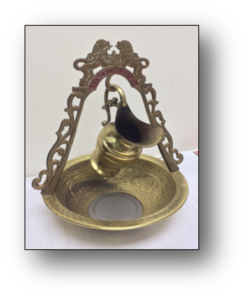 Similar to the Hebrew netilat yadayim, negel vasser is a Yiddish term referring to ritual hand washing.  Literally “nail water,” negel vasser is a term most often referring to the washing one does upon waking up in the morning, presumably to wash away the impurities which may have attached themselves over night.

Hand washing is big in Judaism, being prescribed among our earliest commandments.  The item in the photo, about 7” tall, is – as is engraved into it – for Mayim Aharonim, for a little washing after eating bread, or after eating a small repast after having already recited the Grace After Meals (which Grace is also commonly known as bentshing, although we can “bentsh” – pray – other things as well).  They say Mayim Aharonim requires no blessing, as it is not before eating bread.

Usually seen are the cups with two handles, and bowls of water.  We use those before meals, pouring twice (some say thrice) on the right and then twice (some say thrice) on the left.  After the washing, which is also known as “Mayim Rishonim,” we say the blessing which concludes “al netilat yadayim,” “on the washing of hands.”  After this berakhah, many say we are not supposed to speak prior to blessing and eating bread.

It is believed that the Priests at the Temple in Jerusalem were the first official handwashers.  It was then promoted heavily in Talmudic times, and some say we have continued the practice to remember the Temple.  In fact, the practice of handwashing on many occasions and of ritual bathing may have saved us from
many diseases and invasions of pestilence through the centuries. And it gives mothers another item about which to nag.  “Negel vasser, mein kind!!!!!”

A friend’s cousin used to be called by the family “Pitzy Vasser.”  He was afraid to swim in the ocean, so a relative referred to the shallow water as “pitzy vasser” to encourage him to get his toes wet.  He still refused, and – worse! – the name stuck to him.  That, however, is an entirely different matter.