Shirat Hayam (שִׁירַת הַיָּם),  the “Song of the Sea” (also known as “Az Yashir Moshe,” which is the first line), appears at Exodus 15:1, which we will read next week in Parashat Beshallah, on Shabbat Shirah.  It praises God in recounting the crossing of the Sea of Reeds (the Red Sea) and the destruction of the Egyptians chasing after.

Of course, we also recite (or chant or sing) the Song of the Sea in Shaharit services.

This part of the Torah is written out as a poem, even within the scroll itself.  (See the image to the right.)  (The Song of Moses in Deuteronomy, in Parashat Ha’azinu, is also written out differently, as a poem might be written.)

The Shirat Hayam is also chanted differently, with special “traveling” melody (used on only a few occasions during the year) that is jubilant and distinctive.  We will hear the special cantillation next week beginning at verses 14:29 and 14:31, and then throughout verses 15:1-21.  (In the second triennial one would also hear it at 14:22.)

Another time when we will hear this tune is in reading Numbers 33:10-46, when the Israelites are journeying through Sinai. Below is a sampling of the melody used.

There are some Christian traditions which also include the Song of the Sea, many referring to it as the “Song of Moses,”  including the Eastern Orthodox and the Roman Catholic, who use the liturgy in recounting salvation at the Easter (or Paschal) Vigil, a service celebrating redemption.

Warm up your voice, as well, for the congregational participation next week, as we relive the journey through song. 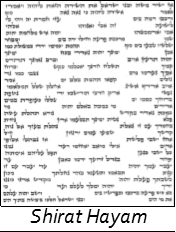