Home | What Are Those Hands Above the Ark Doing? Originally published April 27-28, 2018

What Are Those Hands Above the Ark Doing? Originally published April 27-28, 2018

At the Second Temple, there were steps leading up to a platform, behind which sat the Holy Ark.  The Temple priests, the Kohanim (descendants of Aaron), would stand on the platform (or on the steps leading to it, depending on the source of information and the scholar discussing it) and bless the  public standing below with the Birkat Kohanim.  The blessing is from Numbers (Bemidbar) 6:22 et seq., from Parashat Naso, which we will read on May 26th.  (“Et seq.” stands for “et sequitur” or “et sequentes,” depending on the source, “and following” in Latin.  Probably rabbis don’t use that abbreviation much; I throw it in as lagniappe.)

Also called “nesi’at kapayim,” the raising of the hands, the gesture has an Anglicized Yiddish name, “dukhening,” from the Yiddish verb “dukhenen.”  The Yiddish comes from the platform, in Hebrew the “dukhan,” which the priests stood on or in front of.  [There are whole books written about the Priestly Blessing, including Birkat Kohanim, a compendium of essays edited by David Birnbaum and Martin S. Cohen (2016, New Paradigm Matrix Foundation), should you wish to further your education.]  Some say the hands are in the shape of a shin, or each is in the shape of a shin.  Others say they create windows for God to flow through to those blessed.  Some say the same sign was used to open the Ark of the Covenant.  To some it looks like a Magen David (if the thumbs are pointed down).

The blessing ritual, in its traditional form (which does vary from group to group), begins with Levi’im, the assistants who are descended from Levi, first washing the hands of the Kohanim.  Then once the priests’ shoes are off the Levi’im wash their feet as well.  Then the Kohanim – all those who are present – cover themselves with their tallitot, raise their hands in this gesture, and recite the verses, beginning with “Yivarekhekha…” (and some have rituals with call and response, some put their fingers together in addition to their thumbs, and so on).  Others administer the same blessing at other times – a rabbi on a new bar or bat mitzvah, a parent on a child, etc.  Rob Menes indicates that there is a very special Ashkenazi melody for the Birkat Kohanim.

Priests covering themselves seems to have evolved from the restriction that a priest who has killed, who has blemishes, who has gnarled hands, etc., cannot administer the blessing.  Since they did not want to ostracize anyone but also didn’t want the congregation distracted, they decided that the priests’ faces and hands would be covered, and the congregants are also instructed to cover themselves and/or look away from the priests.  Many scholars dispute the wisdom of many of these goings-on, too much to discuss here.

And, Star Trek fans, didn’t Mr. Spock make this sign as well?  In creating his character, to go with the “Live Long and Prosper” greeting, which rather reminds one of lines in the Hallel, actor Leonard Nimoy (who was active in B’nai Brith and a veteran of Yiddish theatre) added a gesture – a one-handed version of the gesture above our ark. 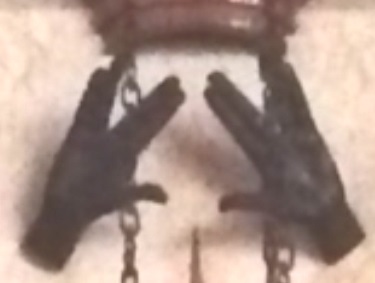